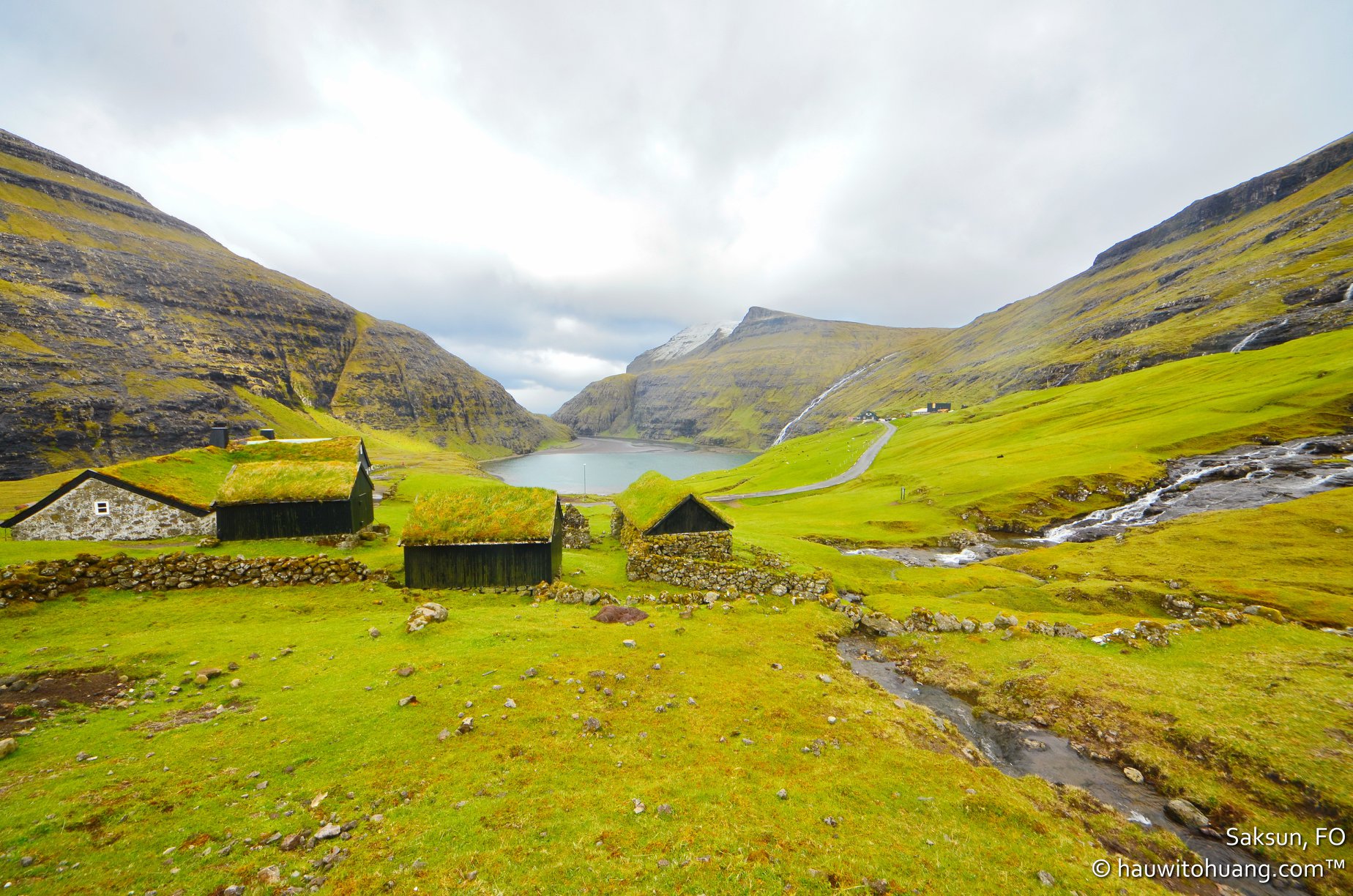 Today we toured Streymoy Island, first we visited Saksun village, the distance from Torshavn to this village was 52km, the journey was taken 1 hour.

Splendidly set in a natural circular amphitheatre high above a tidal lagoon, Saksun is a wonderfully remote hillside village and is one of the most worthwhile destinations in the country. Known for its tranquil atmosphere, the tiny village of 14 inhabitants offers amazing views of the surrounding mountains.

In the fjord, at the foot of the village, is a lagoon. At low tide, it is possible to walk along the sandy shore of the lagoon around the headland.

The village includes a church, built in 1858, and Dúvugarðar, an active sheep farm which also functions as a museum.

From Saksun village we continued to Tjornuvix, the northernmost village of Streymoy, surrounded by big mountains and with a beautiful beach, overlooking the giant and the witch (Risin og kellingin).

The village is very small with a population around 65 people, and this is also a perfect place to see the popular Giant and the Witch which are standing 71 and 68 meters above the sea level. Its current church was built in 1937.

Here we eat lunch in a resident’s house where only the one who sells food in the village and who sells it is only a wafle with tea or coffee for 100 ISK per person :).

Finished from Tjørnuvík we continued our journey leading back to Tórshavn but then continued eastward to the small town of Kirkjubøur.

Kirkjubøur was the episcopal centre of the island in medieval times. Today it’s just a scattering of chalet-like wood-and-stone houses. St Olav’s Church, built in 1111, was dedicated to the king who had formulated Norway’s Christian code during the previous century; the ruins of Magnus Cathedral are hidden behind it.

Roykstovan is a 900-year-old farmhouse with a turf roof, the timber for which came unintentionally from Norway. The ship that was carrying it to another destination sank, and its cargo was washed up at this natural collection point by the Gulf Stream. The building has been occupied by 18 generations of the same Faroese family, and the farmhouse museum is usually open daily in the summer.

Finish Kirkjubøur back to Tórshavn, the capital and largest city of the Faroe Islands. Tórshavn is in the southern part on the east coast of Streymoy.

And to the Tinganes and port area. The Norse established their parliament on the Tinganes peninsula in AD 850. Tórshavn thus became the capital of the Faroe Islands and has remained so ever since. All through the Middle Ages the narrow peninsula jutting out into the sea made up the main part of Tórshavn. Early on, Tórshavn became the centre of the islands’ trade monopoly, thereby being the only legal place for the islanders to sell and buy goods. In 1856, the trade monopoly was abolished and the islands were left open to free trade.

Finished, we returned to the our accomodation and walked to find dinner. Our dinner was decided at Sentrum, a fast food pizza restaurant, burger or fried chicken. We order 1 pizza and 1 fried chicken. Turns out the fried chicken is whole chicken, so the meal still left over and we taking it back for later.