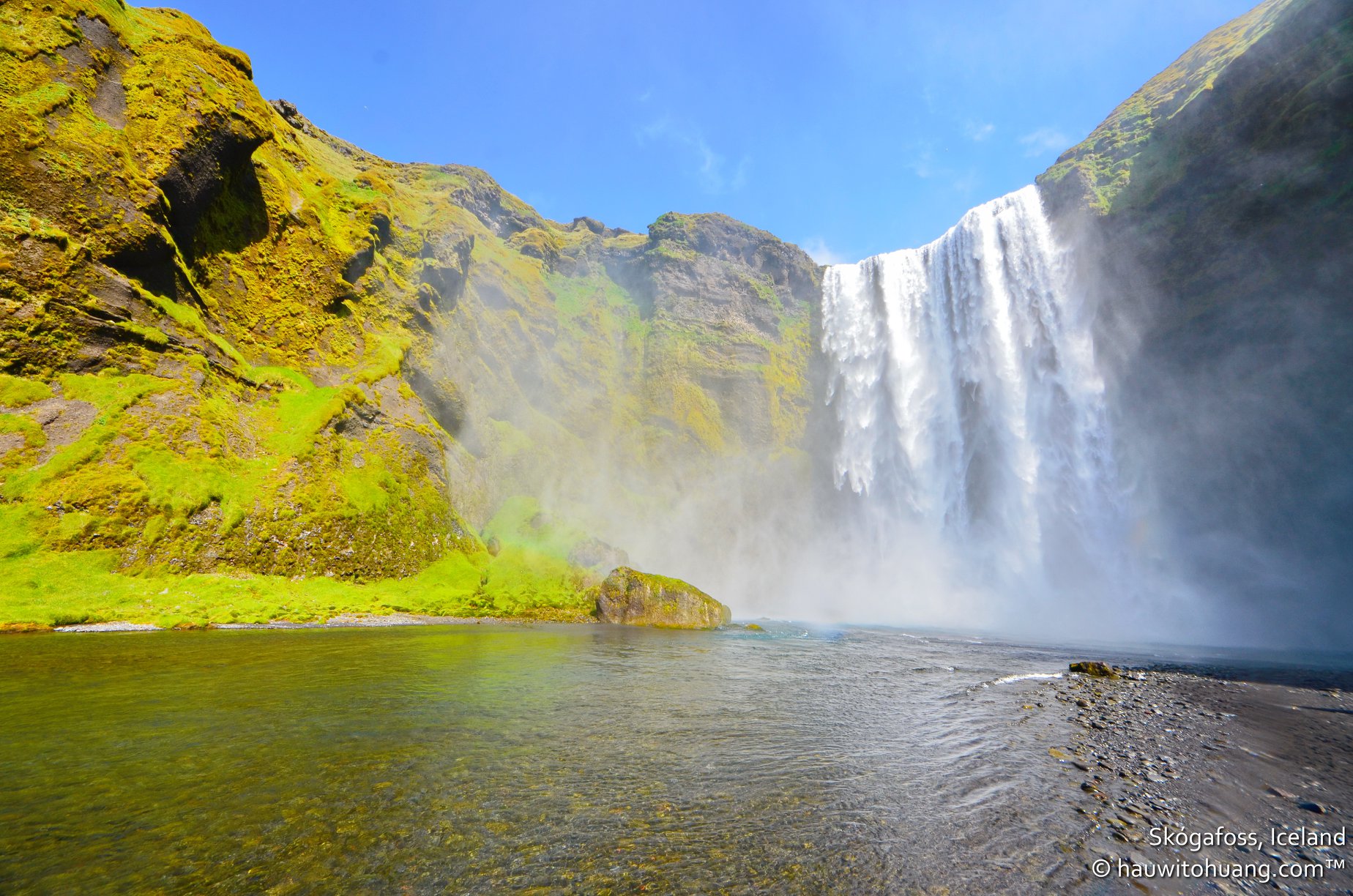 Today we will start the day with Seljalandsfoss, it’s not quite far from our accomodation just 2.3km.

Seljalandsfoss is a waterfall that can be fully encircled, situated on the South Coast of Iceland with a drop of 60 metres.

Due to the waterfall’s close proximity to the Ring Road and impressive natural features, it is one the country’s most famous and visited falls. Majestic and picturesque, it is one of the most photographed features in all of Iceland.
Geology and Surroundings

Seljalandsfoss waterfall, part of the river Seljalandsá, has its origins underneath the glacier Eyjafjallajökull. The volcano beneath this ice cap was the one that erupted in 2010 and caused havoc at airports across Europe.

Then we continue to Skógafoss, 30km with 36 minutes drive.

The Skógafoss is one of the biggest waterfalls in the country with a width of 15 metres and a drop of 60 m. Due to the amount of spray the waterfall consistently produces, a single or double rainbow which is normally visible on sunny days. According to legend, the first Viking settler in the area, Þrasi Þórólfsson, buried a treasure in a cave behind the waterfall. The legend continues that locals found the chest years later, but were only able to grasp the ring on the side of the chest before it disappeared again. The ring was allegedly given to the local church. The old church door ring is now in the Skógar museum.

The land underneath the waterfall is very flat, allowing visitors to walk right up to the wall of water. This will get you drenched, although, on a summer’s day, it can be quite tempting. Skógafoss can also be viewed from the top as a steep staircase leads to an observational platform above the cascade. Many nesting seabirds can be found on the route up.

The waterfall was a location for the filming of the Marvel Studios film Thor: The Dark World, as well as The Secret Life of Walter Mitty.

Before we continue to next destination we had a lunch here first at Skógafoss Restaurant, we order Icelandic Meat Soup, Pork Ribs and Chicken Wings; the portion comes out as usual is big. Total is 5500 ISK.

From Skógafoss we had a 28km with 27 minutes drive to Dyrhólaey.

Dyrhólaey Peninsula is a 120-metre promenade famed for its staggering views of Iceland’s South Coast, as well as its historic lighthouse and wealth of birdlife. It is home to a rock arch of the same name.

Dyrhólaey, which translates to Door Hill Island, is of volcanic origin and was once an island before joining up to the Icelandic mainland. In ancient times, passing sailors used to refer to Dyrhólaey as ‘Cape Portland’.

It is also the southernmost part of the Icelandic mainland, making it a popular stop for sightseers travelling along the Ring Road, and can be found close by the coastal village of Vík í Mýrdal.

Reynisfjara is a world-famous black-sand beach found on the South Coast of Iceland, just beside the small fishing village of Vík í Mýrdal.

With its enormous basalt stacks, roaring Atlantic waves and stunning panoramas, Reynisfjara is widely considered to be the most beautiful example of Iceland’s black sand beaches. In 1991, National Geographic voted Reynisfjara as one of the Top 10 non-tropical beaches to visit on the planet.

According to local Icelandic folklore, these large basalt columns were once trolls trying to pull ships from the ocean to shore. However, these trolls were dim and went out too late in the night; dawn broke on the horizon, turning the trolls into solid stone. Another legend tells of a husband whose wife was kidnapped and killed by two trolls. The man followed the trolls down to Reynisfjara where he froze them, ensuring that they would never kill again.

So mesmerizing are these features that they featured in Season 7 of the HBO Series Game of Thrones; you can spot them in a few scenes shot ‘North of the Wall’.

And last is to Fjaðrárgljúfur Canyon, 80km with 1 hours drive.

Fjaðrárgljúfur is a canyon in south east Iceland. The Fjaðrá river flows through it. The canyon has steep walls and winding water. It is up to 100 m deep and about 2 kilometres long. It is located near the Ring Road, not far from the village of Kirkjubæjarklaustur

Its origins dates back to the cold periods of the Ice Age, about two million years ago. The canyon was created by progressive erosion by flowing water from glaciers through the rocks and palagonite over millennia. A waterfall flows down the western side of the canyon, visible from an observation platform at the end of a one-mile hike up the eastern edge.

In May 2019, authorities closed the canyon a month to visitors after it appeared in a music video I’ll Show You by Justin Bieber. The resulting stream of visitors threatened to damage the canyon’s environment. It’s also was used as the location for the dragon flight scene in the first episode of Season 8 Game of Thrones, when Jon and Daenerys fly the dragons together for the first time. We are lucky have knew this announcement so we can make a slight modification to our itinerary to fit when we arrive at this place it’s already open and today is the first day opened again.

From Fjaðrárgljúfur Canyon we had a 94km long drive to Hof 1 Hotel where we gonna sleep for today, the drive will take about 1:15 hours.