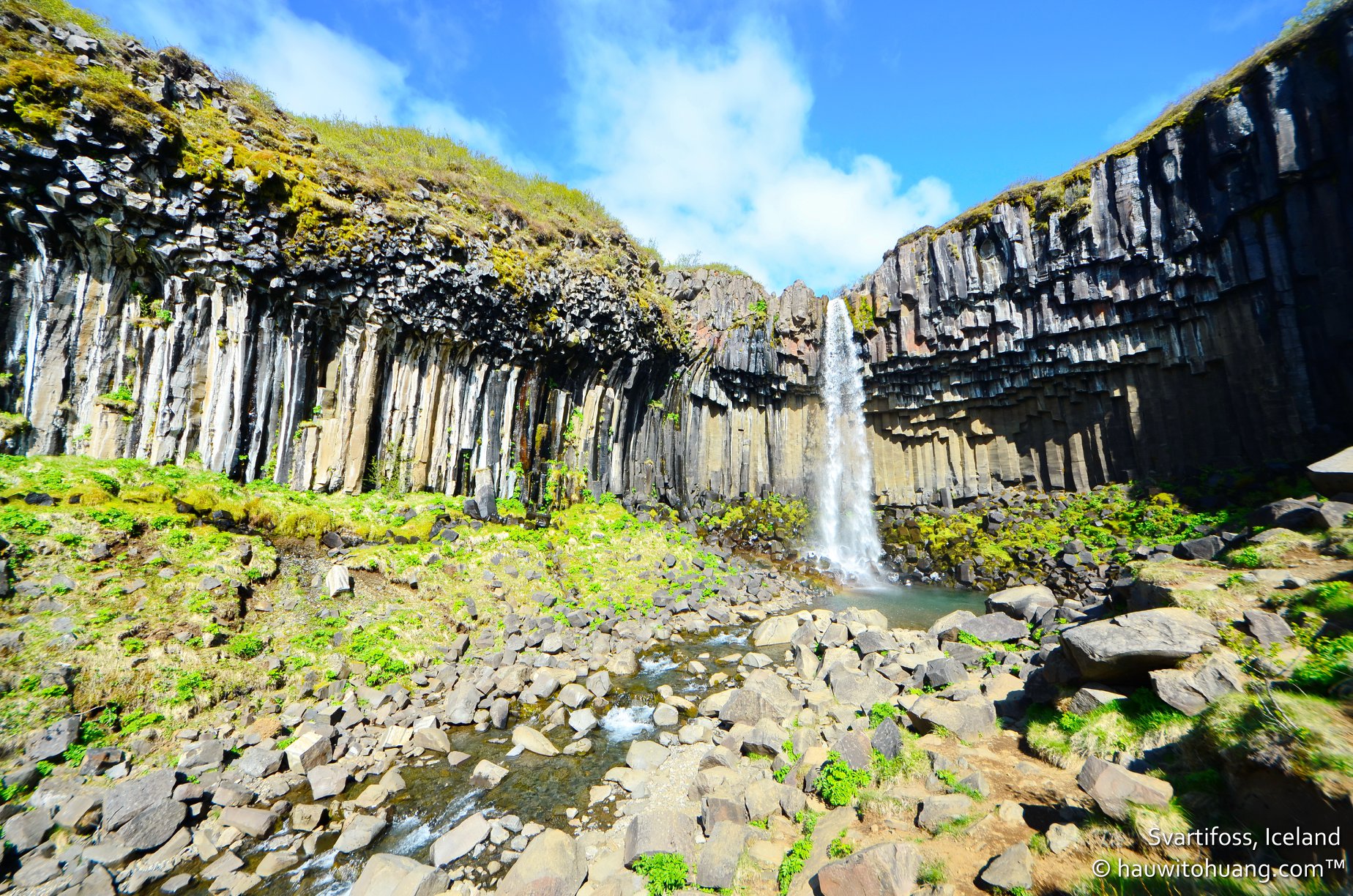 In the morning we had a breakfast complimentary at Hof Hotel, it was buffet but as much as like others it was bread, boiled egg, cheese and meat, cereal etc with coffee and tea. After had a breakfast and proceed checkout we had a stroll in neighbourhood for a while. There was a turf church next building, which was built in 1883 and is the youngest turf church in Iceland. Since 1951, it belongs to the National Museum of Iceland.

After a while we get back to the car and continue our trip.

Our next destination is Svartifoss, it was a detour 20km (17 minutes drive) since Hof is the closest accomodation we can get.

Svartifoss (Black Falls) is a waterfall in Skaftafell in Vatnajökull National Park in Iceland, and is one of the most popular sights in the park. It is surrounded by dark lava columns, which gave rise to its name. Other well-known columnar jointing formations are seen at the Giant’s Causeway in Northern Ireland, Devil’s Tower in Wyoming, United States and on the island of Staffa in Scotland. There are also similar formations throughout Iceland, including a small cave on the beach of Reynisdrangar.

The base of this waterfall is noteworthy for its sharp rocks. New hexagonal column sections break off faster than the falling water wears down the edges. These basalt columns have provided inspiration for Icelandic architects, most visibly in the Hallgrímskirkja church in Reykjavík, and also the National Theatre.

From Svartifoss we continue to Svínafellsjökull, 5km nearby. Svinafelljökull Glacier is one of several accessible glaciers in the area branching off Vatnajokull glacier. The road is a couple K in length and very bumpy. You can do it without a 4×4, just go very slow. There is a small car park at the end and a short walk to an overlook.

From Svínafellsjökull we continue to Fjallsarlon Glacier Lagoon, 47km or 45 minutes drives. Fjallsárlón is a glacier lake at the south end of the Icelandic glacier Vatnajökull. Fjallsjökull which is part of the bigger glacier reaches down to the water of the lake and some ice-bergs are drifting by on its surface.

The glacier calving into the lagoon is a part of Vatnajökull National Park and the better known glacier lake Jökulsárlón is not far from there. From the glacier lake Breiðárlón a little river flows into the Fjallsárlón.

Above, there is looming the famous volcano Öræfajökull. At its shore, in the summertime, it is better to beware of the skúas, big seagulls which have their nests on the ground around the lake.

Then we continue to Jökulsárlón Glacier Lagoon, 11km or 11 minutes drives. Jökulsárlón is a large glacial lake in southeast Iceland, on the edge of Vatnajökull National Park. Situated at the head of the Breiðamerkurjökull glacier, it developed into a lake after the glacier started receding from the edge of the Atlantic Ocean. The lake has grown since then at varying rates because of melting of the glaciers. It is now 1.5 km away from the ocean’s edge and covers an area of about 18 km2. In 2009 it was reported to be the deepest lake in Iceland, at over 248 m, as glacial retreat extended its boundaries. The size of the lake has increased fourfold since the 1970s. It is considered as one of the natural wonders of Iceland.

The lake can be seen from Route 1 between Höfn and Skaftafell. It appears as “a ghostly procession of luminous blue icebergs”. Jökulsárlón has been a setting for four Hollywood movies: A View to a Kill, Die Another Day, Lara Croft: Tomb Raider, and Batman Begins, as well as the reality TV series Amazing Race. In 1991, Iceland issued a postage stamp, with a face value of 26 kronur, depicting Jökulsárlón.

From Jökulsárlón we drive to the opposite of the road to the Diamond Beach, actually you can go there by walk. Diamond beach is a black sand beach and in the winter you can see a big chunk of iceberg floating or stranded at shore. Cause it’s summer now there is no iceberg we can see here.

From Diamond Beach we continue the drive to Seyðisfjörður where we have a night here at Hafaldan HI Hostel. The drive will took alomst 300km with 4 hours drive. Our route passed the Oxi route thru the mountain with gravel road, it is the shortest but extreme condition.

A little brief of Seyðisfjörður, Seyðisfjörður is a town and municipality in the Eastern Region of Iceland at the innermost point of the fjord of the same name. Settlement in Seyðisfjörður traces back to the early period of settlement in Iceland. The first settler was Bjólfur, who occupied the entire fjord. The burned down ruin of a staf church at Þórunnarstaðir has been carbon-dated to the 10th century, with earlier graves exhumed dating back to the 8th century.

The town settlement in the Seyðisfjörður area started in 1848. The town was settled by Norwegian fishermen. These settlers also built some of the wooden buildings which still exist in the town.